VANCOUVER, British Columbia - Polaris Materials Corporation (TSX:PLS) (the "Company" or "Polaris") today reported the financial results for its first quarter ending March 31, 2016. All currencies are US dollars unless otherwise noted.

Sales of aggregates in the first quarter were 516,000 tons with revenue of $7.9 million, 28% and 24%, respectively, below the same quarter in 2015. Cost of goods sold declined to $8.3 million in Q1 2016 from $9.9 million in the prior year quarter, attributable primarily to the reduction in volumes, offset by an increase in costs attributable to changes in sales mix. In spite of the expected decline in volumes, we reduced cash used by operations during Q1 2016 to $0.7 million from $1.4 million used in Q1 2015.

Ken Palko, President and CEO, commented: "In spite of headwinds driven by unusually wet weather and planned maintenance, we are pleased that we were able to manage costs and reduce cash utilization during the seasonally slow first quarter, while continuing to pursue business development activities that will set us up for success later this year. We are very pleased with the initial progress we are seeing from our Long Beach terminal and continue to be excited about the opportunity to develop Black Bear. We are rapidly progressing our evaluation work on this exciting development project and aim to share the findings by mid 2016."

The selected financial information set out below is based on and derived from the unaudited consolidated financial statements of the Company. For a more detailed table of quarterly results please refer to our Q1 2016 MD&A, which can be found on SEDAR or the Company's website. 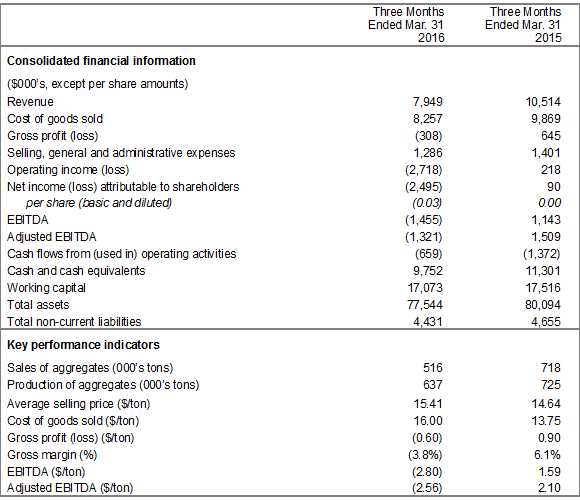 Aggregate sales for the first quarter of 2016 of 516,000 tons were a 28% decrease over 2015. Sales volumes in Q1 2016 were modestly below our expected range of 550,000 to 600,000 tons. Heavy rain in our key markets, as well as scheduled maintenance at one of our Bay Area delivery points impacted volumes. On May 3, the largest aggregate producer in California reported to shareholders that "California shipments fell more than 10 percent [in Q1 2016] from the prior year … wet weather negatively impacted shipments." Sales at Long Beach were better than expected during the quarter and when combined with expectations for several large orders early in Q2, necessitated re-allocating volume from immediate sales to restocking inventory at the Long Beach terminal. Total sales volumes in March 2016 were strong at approximately 314,000 tons which is consistent with our monthly volume expectations for the full year.

Revenue for the first quarter of 2016 decreased by 24% to $7.9 million, compared with $10.5 million in 2015. Despite lower than expected volumes, revenue benefited from positive sales mix with a higher proportion of sales delivered to San Francisco plus the introduction of sales delivered into Long Beach, which both include freight charges as opposed to those sold ex-quarry. Average selling price ("ASP") during the first quarter of 2016 of $15.41 per ton increased $0.77 per ton from $14.64 per ton in 2015. Compared with 2015, price variance was a favorable 1% due to price increases, offset by an unfavourable variance of 4% due to a reduction in fuel surcharges. A favorable sales mix variance of 6% was due to increased sales to customers with delivered pricing, including our Long Beach terminal.

Cost of goods sold in the first quarter 2016 decreased by 16% to $8.3 million, compared with $9.9 million in 2015. Cost of goods sold per ton in Q1 2016 increased to $16.00 compared to $13.75 in Q1 2015. Lower than expected volumes reduced overall cost of goods sold, however, fixed costs applied to lower tonnage, higher delivery costs due to increased sales mix to customers that include freight, plus the strengthening of the Canadian dollar (as quarry costs are incurred in Canadian dollars and translated in US dollars for reporting purposes) contributed to higher costs on a per ton basis.

The net loss attributable to shareholders during the quarter ended March 31, 2016 was $2.5 million ($0.03 per share loss) compared to a net profit attributable to shareholders of $0.09 million ($0.00 per share, net profit) during the quarter ended March 31, 2015. The results this quarter were principally attributable to the lower volumes and the significant effect of foreign exchange losses in the current quarter. These foreign exchange losses are a function of U.S. dollar receivables held by Orca Quarry, which has a Canadian dollar functional currency, owing from the Company's U.S. subsidiary, Eagle Rock Aggregates.

The Company operates in one segment: the development and operation of construction aggregate properties and projects located in the western North America.

In the first quarter of 2016, the quarter-on-quarter average delivered selling price decreased by 1.3% as a consequence of the pass through of lower shipping fuel surcharges from the fourth quarter of 2015, which reflected the decreasing trend in the world crude oil price during the period.

The Company's Orca sand and gravel quarry operates year-round, however, sales demand is seasonal due to the impact of poor weather conditions, particularly in the first (winter) quarter which have an impact on production volumes and demand for the Company's products. As a consequence the Company's financial results for any individual quarter are not necessarily indicative of results to be expected for that year. Sales and earnings are typically sensitive to regional and local weather, market conditions, and, in particular, to cyclical variations in construction spending. 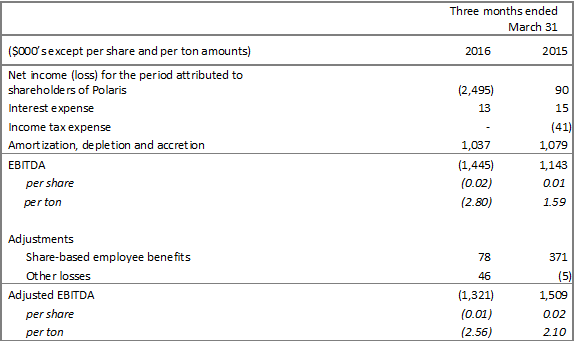 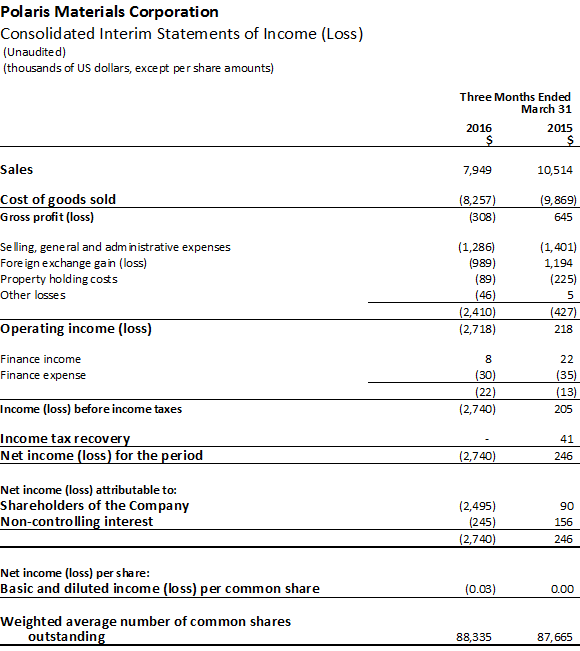 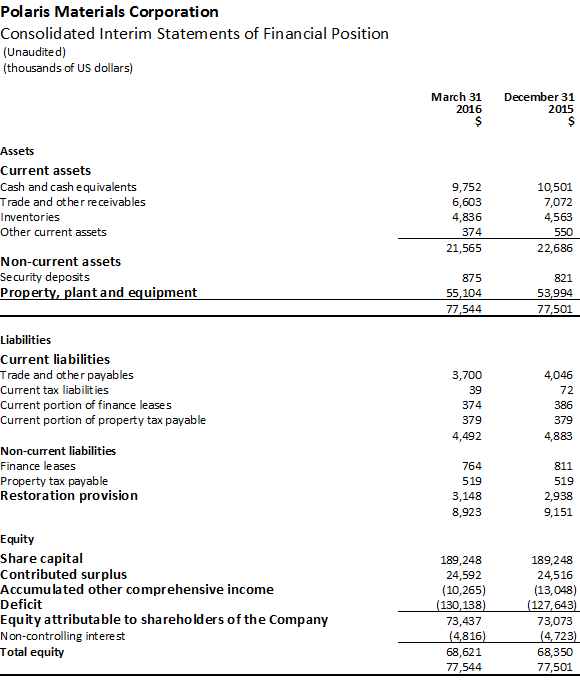 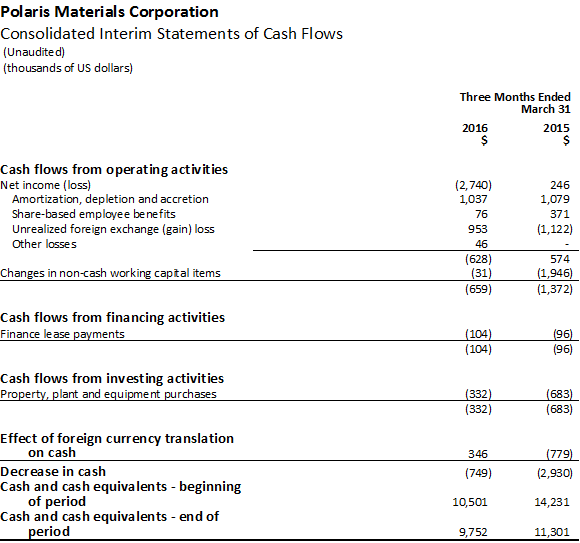