VANCOUVER, British Columbia - Polaris Materials Corporation (TSX:PLS) (the "Company" or "Polaris") today reported the financial results for its second quarter ending March 31, 2016. All currencies are US dollars unless otherwise noted.

Adjusted EBITDA for the second quarter reflected the higher sales volumes in the quarter, offset by changes in sales mix and costs related to the start-up of our Long Beach terminal. These results were robust and consistent with the Company’s expectations for the full year. Construction activity both in California and throughout the US continues to show healthy levels of activity with a significant backlog of projects, particularly in Los Angeles, now progressing towards the start of construction. Ongoing discussions at multiple levels in the construction industry supply-chain have demonstrated the value added to major projects through the use of high performance concrete aggregates from Orca. We expect a positive pricing environment, as well as ongoing cost reduction programs, to contribute to healthy margins through the remainder of 2016.

The second quarter was the first full quarter of operations at the Long Beach terminal. High volumes of material were successfully delivered in a demanding schedule for Oceanwide Plaza’s foundation concrete pours. This type of scheduling and coordination is typically demanded by contractors participating in large, high specification, projects on which the Company intends to focus its marketing efforts. We are well positioned to supply these projects as they are favorable applications for our high performance concrete aggregate and proven high volume delivery capability.

Subsequent to the release of our Q2 2016 operating results on July 15, 2016, the Company determined that permitting and financing delays have resulted in the deferral of several significant planned projects in the LA market into late Q4 / early 2017. We continue to have a robust project pipeline for our high performance concrete aggregates but the delays mean that the majority of sales for these projects will now occur in 2017. As a result, we are revising our full year sales outlook for the Long Beach terminal to between 175,000 and 250,000 tons, and our overall sales outlook to 3.0 to 3.2 million tons. The shift in these projects will fit well with our 2017 activity in the high-end market of Los Angeles, and help offset the usual seasonal slowdown typical of Q1 in San Francisco.

Ken Palko, President and CEO, commented: “Sales volumes and revenues in Q2 2016 are our highest since 2014. Notwithstanding certain project delays in Long Beach, we continue to have a robust pipeline of major projects that we believe we are well positioned to secure over the next six to twelve months. Our Long Beach terminal will continue to ramp-up over the balance of the year and we expect unit costs to improve as we continue to increase throughput at the facility. In addition to building our volume through further sales, we will be working to advance discussions with our First Nations partners as well as complete the initial resource estimate for the Black Bear project, and look forward to sharing the results.”

The selected financial information set out below is based on and derived from the unaudited consolidated interim financial statements of the Company. For a more detailed table of quarterly results please refer to our Q2 2016 MD&A, which can be found on SEDAR or the Company’s website. 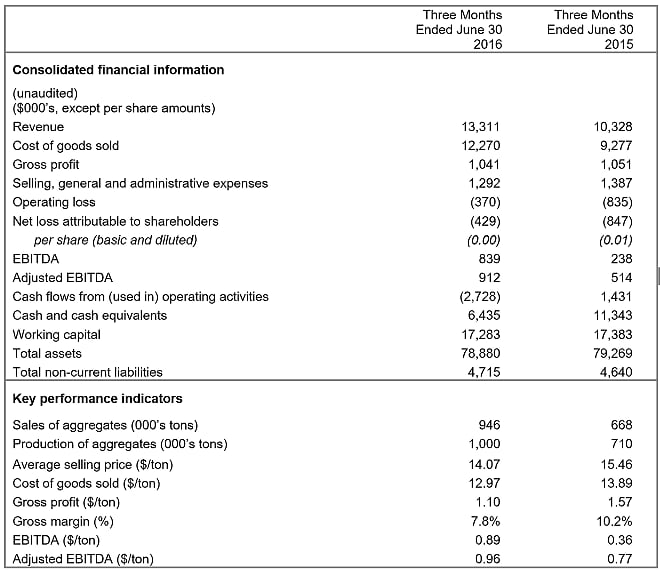 In the second quarter of 2016, the quarter-on-quarter average delivered selling price decreased by 3.4% as a consequence of passing through lower shipping fuel surcharges from the first quarter of 2016, which reflected the decreasing trend in the world crude oil price during the period.

The Company’s Orca sand and gravel quarry operates year-round, however, sales demand is seasonal due to the impact of poor weather conditions, particularly in the first (winter) quarter which have an impact on production volumes and demand for the Company’s products. As a consequence the Company’s financial results for any individual quarter are not necessarily indicative of results to be expected for that year. Sales and earnings are typically sensitive to regional and local weather, market conditions, and, in particular, to cyclical variations in construction spending.

Adjusted EBITDA for the second quarter of 2016 of $0.9 million ($0.96 per ton) represented an improvement of $0.4 million, or 80%, over the prior year comparative of $0.5 million ($0.77 per ton). Additional tons sold in the current quarter reduced comparative quarrying costs per ton and limited the impact of costs associated with the first full quarter of operations at the Long Beach terminal.

Aggregate sales for the current quarter were 946,000 tons, a 42% increase over sales of 668,000 tons in the second quarter of 2015. Shipments of the Company’s products increased compared to the prior year due to both increased delivered shipments into San Francisco and ex-quarry sales. Additionally, this was the first full quarter of operations for the Long Beach terminal.

Average selling price (“ASP”) during the current quarter of $14.07 per ton was a decrease $1.39 per ton from $15.46 per ton in the same period of 2015. Year on year prices decreased $0.50 per ton or negative 9% due to lower fuel surcharge pass-through, which reflected the decreasing trend in the world crude oil price during the period. Sales mix variance decreased the ASP by $0.90 per ton due to increased ex-quarry sales that do not include delivery costs.

Revenue and ASP per ton are influenced on a quarter by quarter basis by base pricing, shipping fuel surcharges, overall market demand, the distribution of tonnage delivered to the various California terminals, and the varying percentage between delivered and ex-quarry sales.

During the second quarter of 2016 the Company’s gross profit was $1.0 million or $1.10 per ton compared with a gross profit of $1.1 million or $1.57 per ton in the prior year period. As noted above, gross margin was impacted by sales mix and operating costs at the Long Beach terminal.

Current quarter selling, general and administrative (“SG&A”) expenses of $1.3 million decreased 7% compared with $1.4 million during the same quarter in 2015. The decrease is principally due to lower non-cash share-based employee benefits. Net of non-cash charges for stock based compensation, current quarter SG&A represented 9.2% of sales compared with 10.7% last year. Total SG&A during the quarter was 9.7% of sales compared to 13.4% of sales during 2015

The Company will host a conference call on Wednesday, August 10, 2016 at 8:00 am Pacific Time (11:00am Eastern). Details to access the call live are as follows: 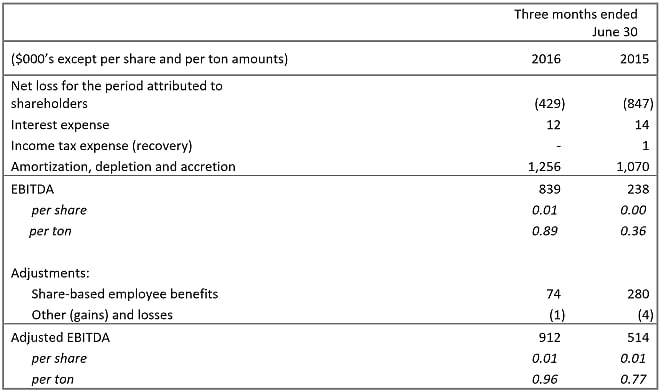 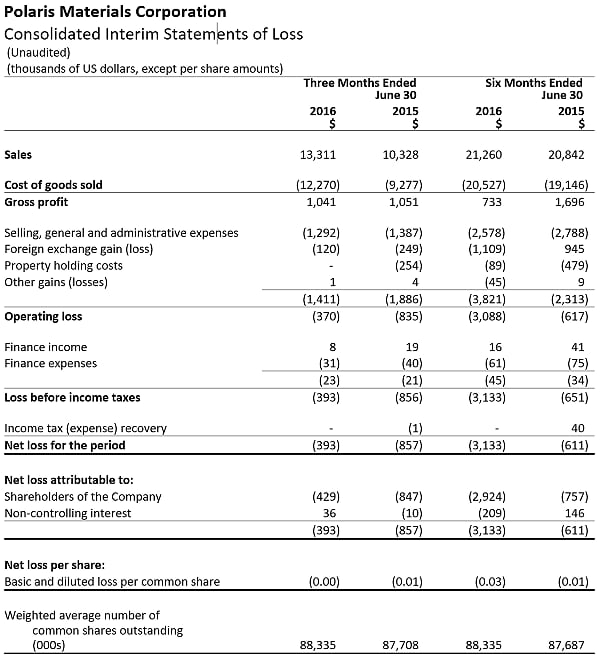 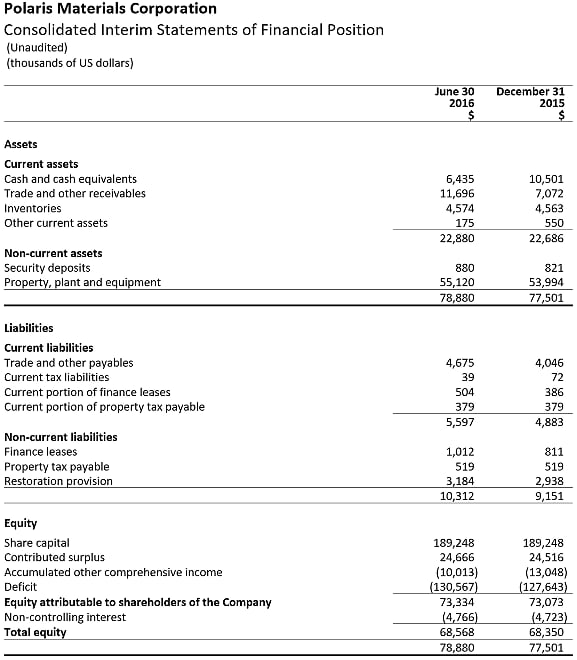